Made a small browser game where you play as generator against discriminator. 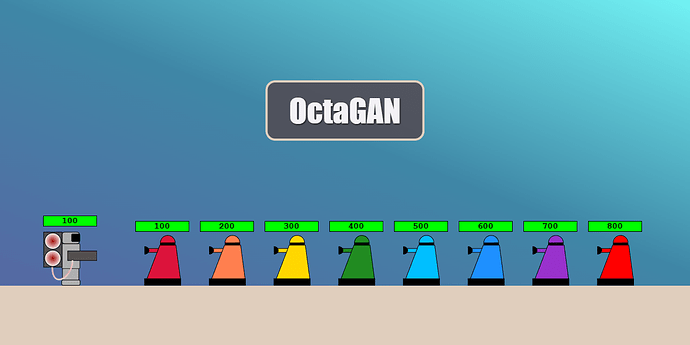 Save Princess Attention From 8 Discriminators. Contribute to morozig/octagan development by creating an account on GitHub.

Welcome to the forum and thanks for sharing your work with us! If I understand correctly I am trying to figure out a pattern that ends up dealing most damage vs the various robots to figure out how the image relates to damage over turns in time for the correct colour sequence of robots? That is pretty cool!

It would good if i could “paint” colours faster vs click each square so faster to set up a pattern to test but other than that is is quite fun! And if learning about GANs etc it really brings it to life to see how you adapt your guesses over time to try and get better. Would be nice to chart performance of different tiles over time so I can iterate faster and compare to previous results what works better or worse to as my memory is terrible

Thanks for sharing though! Are you planning to use this as part of some educational thing?

Thanks for checking it out!

I think you are right, this game could serve educational purposes for GANs. Then I would change it so that each enemy would discriminate against a particular class of objects like cats, flowers and smiley faces. It would also be a lot more fun to play than the current version! I will probably try to do it later. Though I don’t have any educational platform.

What I actually wanted to explore with this game is an idea of encoding one image with a neural network, somewhat similar to SIREN. And then manually decoding it. Currently your damage is proportional to how close your image to the key image. And each level is just more sensitive to a particular color.

Ah I see! Understood - thanks for clarifying! Certainly a fun one to play with. Look forward to seeing where it goes.